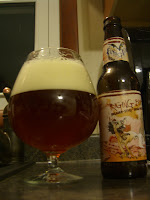 Our friends over at Flying Dog were kind enough to send me a couple of bottle of their Raging Bitch Belgian-style IPA just before Christmas.  I'm finally getting to posting my review...

Inspired by the American India Pale Ale (IPA) and Double IPA, more and more Belgian brewers are brewing hoppy pale colored ales for the US market (like Chouffe & Urthel), and there's been an increase of Belgian IPAs being brewed by American brewers. Generally, Belgian IPAs are considered too hoppy by Belgian beer drinkers.

Various malts are used, but the beers of the style are finished with Belgian yeast strains (bottle-conditioned) and the hops employed tend to be American. You'll generally find a cleaner bitterness vs. American styles, and a pronounced dry edge (very Belgian), often akin to an IPA crossed with a Belgian Tripel. Alcohol by volume is on the high side. Many examples are quite cloudy, and feature tight lacing, excellent retention, and fantastic billowy heads that mesmerize (thanks, in part, to the hops).

Belgian IPA is still very much a style in development. 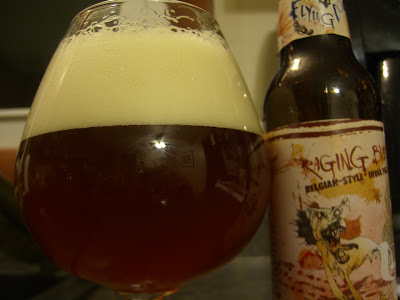 1. Appearance - Burnt amber with a cloudy haze.  A beautiful creamy head with some lacing.

2. Smell - Starts with some malt and Belgian yeast, finishes with hoppy citrus and...  raisin?

3. Taste - Wow, that started off very hoppy, taste of grapefruit, distinct yet subtle Belgian yeast flavor gradually balances out the flavor as the beer settles.  Initial hop blast mellows and a butter scotch and citrus flavor join it on stage. A dry finish, very tasty.

4. Mouthfeel - Nice carbonation, a little prickly with the grapefruit flavor and texture, but in a great way.

5. Drinkability - Goes down surprisingly easily considering the IBUs and alcohol levels.  But if you take the time to enjoy this one slowly, it makes for a nice fireside beer with a kick.  I can see myself picking up a six pack of this delight over the winter for a change of pace from winter beers.