Volunteering to work at the ACBF this year was a fantastic idea, I had an absolute blast.


Kenn, Dave and I climbed into a mini van and made out way up to Boston, about a 2 hour drive.  I thought it would be fun to watch  a beer themed movie on the trek North, so I rented "Beer Fest" which happens to be surprisingly good, even the third or fourth time you see it.  It certainly provided some laughs and made the trip go faster.

After arriving we toyed with the idea of parking on the street at the meters, like I've done in years past, but eventually we decided to pay about $13 to park across the street from the Atlantic Beer Garden and the Whiskey Priest, only a short walk to the fest.  We were there a little early so we grabbed a pre-fest pint at "the priest" before signing in with the fest officials. 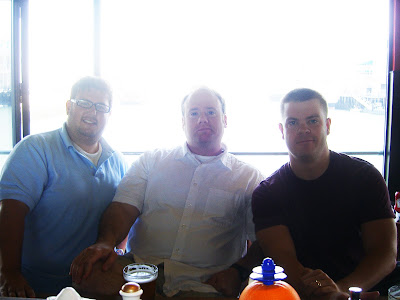 A last drink with Kenn before he ascended into the heavens
on a cloud with cherubs in tow...
Actually this is us a the Whiskey Priest, in a horribly back-lit photo our bartender was kind enough take for us...
Fest Tip #1 (You may need to ditch you buddy or your girlfriend) - Once we got there, changed into our staff t-shirts and made our way to our assignments we realized we would not be working together, which was fine.  But a note to any couples out there who may consider volunteering, I saw a few folks get split up from their significant others who worked on opposite sides of the venue.  Just keep that in mind before you sign up for future events.

Kenn's section was right next to mine, so we could hang out now and then.  Dave was on the other side of the hall, but our breaks matched up, so we had some hanging out time as well... 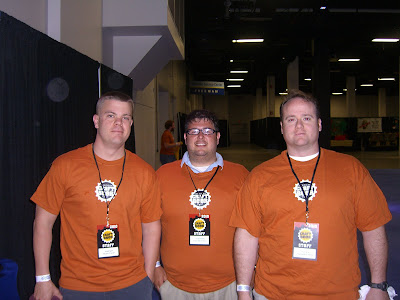 If only you knew the power of the orange side...
These staff shirts were the next best thing
to blue tights and a red cape at the ACBF, metaphorically speaking.
I don't *really* wear tights so no real point of reference, as far as you know.
(Me, Dave & Kenn just before our session kicked off...)
Fest Tip #2 (Early bird get the worm, and the beer) - Before the session started, some of the brewers were kind enough to pour samples ahead of time for the event staff.  If you volunteer for a future ACBF, be sure to get there early enough to get acclimated, meet your team, and get in some early samples and perhaps some freebies too. 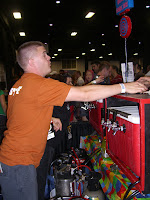 Fest Tip #3 (With great power comes great responsibility) - The greatest thing about working the fest is the intoxicating power of the shirt.  With a staff shirt, you can literally cut any line...  ANY LINE!  Including the line for chow, the bathroom line, or any brewery line.  That's right, no waiting for the staff.  Walk right up, say excuse me, ask the brewery if they need any ice or something like that, and then ask for a sample.  That's it...  I found myself holding back from shouting "UNLIMITED POWER!" at the top of my lungs...  I may not have been drunk, but I was nearly drunk with power!

I remember cutting a VERY lengthy Dogfish Head line, and getting some unhappy comments from two young guys behind me as I got my beer.  "Oh this guy is just going to cut us?  He thinks he can do it because he has that shirt on?!?"  To which I replied, "Yes, yes I am."  They didn't like that very much, but I smoothed it out and had them laughing it up moments later.  It's important to keep everyone happy, while cutting them.

I had a couple of monetary offers for my shirt throughout the fest.  Apparently the power of the shirt was not lost on some of the folks stinking of shirt envy...  But I would never sell mine, never...  (well maybe for a $100...  I kid, I kid...)

What they didn't realize was you had to earn the shirt by doing a little thing I call work.  Bags of ice needed to be delivered, rinse buckets needed to be emptied, crowds needed to be controlled, and beers needed to be poured.  Also, the staff had to enjoy their samples "back stage" behind the black curtains...  Ignore that man behind the curtain!  A small price to pay for being a part of such a cool event. 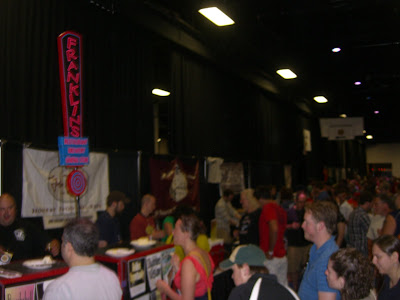 A blurry shot of my part of section F.
On the far left is the Franklin's booth I poured at a good portion of the fest.
I was grateful that I was given a pretty good position to work.  I was a "monitor" for section F.  Our team Captains (the purple shirts) were all very nice and helpful, and everyone on the team was friendly.  So it worked out very well.  Monitors are basically the eyes and ears of the fest.  You make sure the crowd is in control, you check with the brewery staff so they have what they need, and you make sure there's not too many over-pours and be ready to call security if folks get out of hand.  We didn't run into any real problems in our section.  Apparently one of the "veteran" volunteers took issue with one of the breweries in my section regarding their over pouring.

Fest Tip #4 (Over pour = bad, but don't be a nag) - Over pouring is when a brewery staff member pours more beer into the sample cup than they should.  They pour over the line.  The event is not a place to get hammered, and keeping the samples to a reasonable amount just makes sense.  With that said, I didn't see any point in busting chops for a few minor over pours, it can happen by accident, very easily.  I think some of the monitors took their job too seriously and apparently some of the crowd thought so too.  At the end of the session an angry mob essentially scolded one of my fellow monitors with a derogatory group chant.  I felt bad for him, but I also think he needed a reality check. 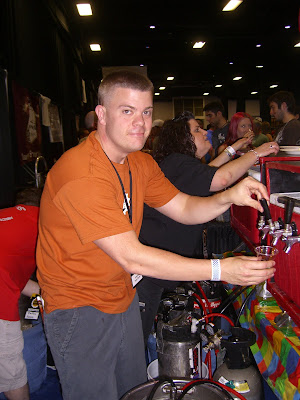 An island of calm in the eye of the storm.
I was called in to help pour during an
unexpected rush on the Franklin booth.
With that said, I have no excuse for this odd, hunchback like pose...
Fest Tip #5 (Pour = good, do it if you can!) - Speaking of over pours, I was privileged to pour for Franklin's Brewery after it became apparent their line was getting too long and moving too slow.  When I approached one of our team Captains and asked if I should be doing something to manage their crowd and lengthy line he said, "would you mind pouring for them to make it go quicker?"  Within a minute I was sling beers along side Mike Roy.  Franklin's had a nice crew of folks working and their beer was beloved by all.  The Blond Bombshell and the Hop Zen went fast, but they offered a wide variety of brews and were in high demand.  I would like to apologize publicly for any accidental over pours I may have done... 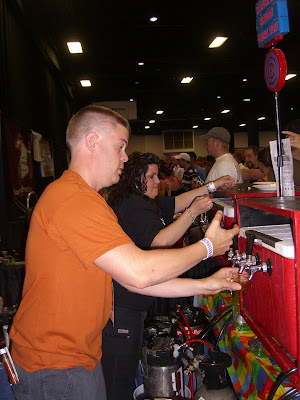 That's me working the taps at the Franklin booth like champ...
(champ not chimp!)
I had a great time, but I was happy when last call was announced, my feet were killing me from standing all day.  As we started to cut off the pouring lines and gently nudged folks out the door, one of the breweries (the one nagged a little too much for a few accidental over pours) was kind enough to give the staff more samples, they even let one of staff members take the helm at the taps.  Suddenly they were swarmed by a sea of orange staff shirts...  Nice guys...

Would I do it again?  Absolutely, I think this maybe the only way to go moving forward.  I got to help, and had fun doing it, while saving some cash too...  It was a win/win/win in my book...

Side bar 1:  I hated HATED the new bio friendly sample cups.  They were horrible.  I felt like I was crushing them when I was pouring...  A few of us found out they had some of last year's harder cups in a box and made the swap.  It just had to be done...

Side bar 2: Made some small talk with the Alström brothers at various points in the day, I also caught Jason glaring at me briefly from across the hall.  I asked few folks about it, and they said, it's just the way he looks.  I shouldn't worry...  Later in the as I was leaving he and I exchanged some pleasantries, they must have been right.  I've been told I often look angry and/or mean when people first meet me.  So I guess I can relate.  Todd walked by me when I was taking a break with a sample in hand (in the wrong cup from last year) while I sat my tired keester on an igloo cooler.  He commented that he was afraid to stop moving, for fear he'd fall asleep...
at 8:50 PM