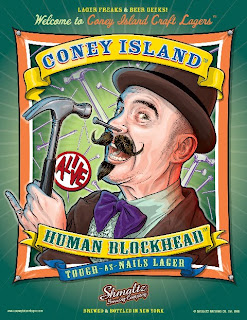 The good folks at Shmaltz Brewing Company asked me to review their Coney Island Human Blockhead, a American Amber / Red Lager with a "B" rating over at beeradvocate.com.

I decided to review this brew with the help of my brother Ted, who has never reviewed a beer before.  His tasting notes are below along side mine.


A sort of catch-all category, these lagers boast a bit more malt backbone and overall character than their lighter sister styles. Bitterness is generally low.

(In this case a whopping 10% abv)  That was not much of a style description, leads a lot open to interpretation.

Some words from the brewery...


Originally developed by renowned magician and sideshow performer Melvin Burkhart, the "human blockhead" stunt remains a staple at the Coney Island sideshow to this day. With Burkhardt leaving after 25 years of performance in Coney Island, the act is kept alive by the current MC of the CI Sideshow, Donny Vomit. The sideshow runs from April - September, and since Donny joined in 2004, he has performed over 2,000 shows. He comments, "As a kid, I always thought it would be cool to have an action figure made after me, but having a kickass beer is a whole lot better. Drink my beer!!" Coney Island Human Blockhead(TM) pays delicious tribute to the wildly mustachioed MC and the legacy of this shocking act.

1. Appearance - Red or burnt amber, somewhat clear, with a slight haze.  Nice foamy head with a hint of the same amber/red hue.  A good tilt of the glass shows ample lacing...  (Ted says, "The beer is amber in color, a little cloudy, nice head."

3. Taste - Malty, roasted plum flavor.  The hops and the alcohol come through at the end.  It reminds me of a lighter more sweat barley wine with just a hint of cherry cough syrup... but in a good way.  (Ted says it has a bit of an after taste, but he was not sure how to describe it...  Likens to toasty English Ale that finishes like a good cigar.  Brilliant really, I taste the cigar now too, good call...)

4. Mouthfeel - Moderate to heavy, with a thin syrupy like feel...  Not overly carbonated.  (Ted said it feels like carmel.)

5. Drinkability - It's an easy to consume, but meant to be savored, a malt bomb that packs a wallop.  (Ted likes the beer and would have another.  Sadly we were only sent one...)