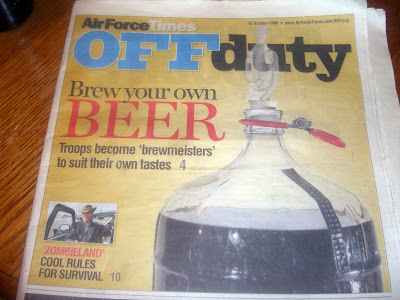 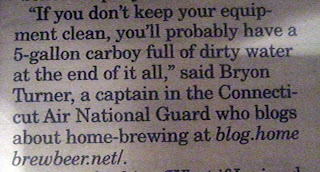 I received a phone call a wile back ago from one of my former troops...  He was away on training, and found an interesting article about homebrewing in the Air Force in the Air Force Times, and was amused to find a quote from his former boss and fellow homebrewer.

His wife was kind enough to bring me the copy he snagged for me and she brought a bottle of his latest homebrew. 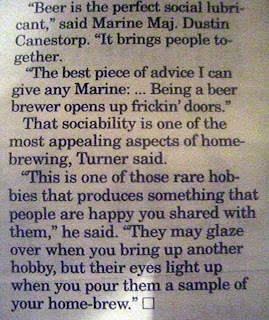 Tonight, I cracked his beer open and here is the review: 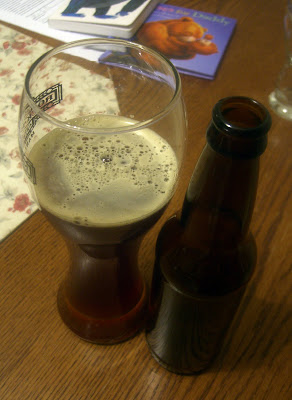 Style: Not really sure let's just call it a homebrew

2. Smell - Sweet malty smell with a with a underling scent of alcohol. (A note on smell - I have a very limited sense of smell, that comes and goes, so my opinions on beer smells should be taken with a grain of salt... That being said, my nose must have been working that day!)

3. Taste - Strong sugary sweet roasted malt taste coupled something that reminds me of a mix of beats and raisins.  Reminds me of a stronger version of my Frankenbrew.  A twangy bitter-sweet end with a fairly strong alcohol flavor.

4. Mouthfeel - Surprisingly light bodied, lacks carbonation, but that may not have been true for the entire batch.

5. Drinkability -The brew shows this young brewer's potential.  He didn't take the easy way out and make a batch from a "Betty Crocker" recipe in a box.  He took a chance and made a beer, one that wont win any prices, but at the end of the day is a flovorful brew
at 8:34 PM