Frankenbrew - long over due recap

Before I left town for a number of months for work, I brewed what was touted as an "Oktoberfest inspired ale" by one of the folks over at beertools.com. As I stated in a previous post...

After seeking out feedback from the homebrew-blogosphere, I learned that it was closer to an Altbier

Making what I would later refer to as Franken-beer proved to be a bit more trouble than it was worth. I had to keep the fermenting wort close to 65 degrees, and it was pretty hot out at the time, so I had to lock it up in an air conditioned room, and jack my electric bill up. It was the first brew I used a secondary for and the first time I used the Tap-A-Draft kit. 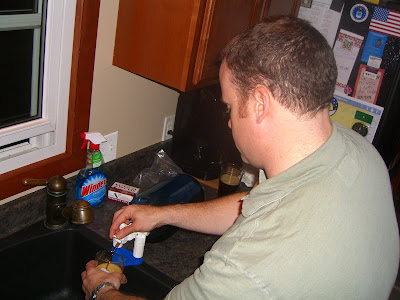 Kenn "breaks the seal" on the Tap-A-Draft... 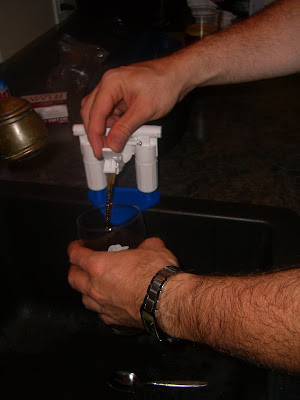 Most folks don't know that Kenn is in fact a semi-pro hand model.
I wonder if he gets his arm hair snagged on the fancy watch.

I had some errors along the way, including breaking my hydrometer in the wort! No one died from drinking Franken-beer (at least not yet) so I suppose no harm was done. And let's not forget the drama with my bung hole! Bottom line, this brew brought a number of firsts for me and I made a number of mistakes. And finally, the results were mediocre at best...

I had some of my buddies over before I left town to help me put my mediocre brew to work. We "cracked open" one of the Tap-A-Draft bottles and had our way with the Franken-beer. For what ever reason, the beer was mostly flat. I can't blame the recipe for that, I suspect it happened because of my bung/secondary issue. The flavor was OK, but not knock your socks off great. I think the lack of carbonation was the biggest issue overall.

The Tap-A-Beer does improve a flat beer. The CO2 creates head for an otherwise flat brew.

A note to any would-be Tap-A-Draft users... Make sure the tap is closed before locking in the CO2, your camera man may otherwise get a beer shower...

My local homebrew shop guy told me later that if you put the Tap-A-Draft bottle in the fridge with the tap and CO2 hooked up, and let it sit for about a week, the beer would have improved carbonation and would taste a bit better. It's true as I found out more recently.

When Kenn was over a week or so ago to help me with my latest brew and snow wort chilling activities, we cracked open the last of the Franken-Beer. It still wasn't great. But we enjoyed more of Kenn's beers that night, as they were better, so I let the bulk of the bottle sit in the fridge with the CO2 still connected, and it did seem better throughout the week. Better head, better clarity and better over all flavor.

So there you go, a combo Franken-beer wrap up and Tap-A-Draft review of sorts. I definitely like the Tap-A-Draft, and plan to bottle this next batch entirely with the system. Stay tuned for the results.
at 6:15 PM 7 comments 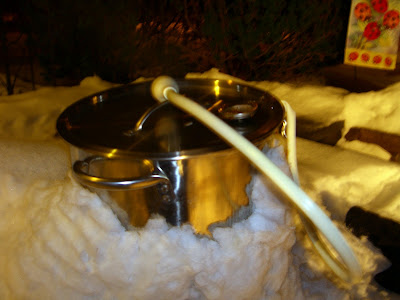 Have you ever used snow to help chill your wort?

I finally got back on the horse and brewed something... I should say it was over a week ago, my time is very short these days with work and family gobbling up nearly all of my time. Sadly more work than I'd like and less family... But I digress... With my limited time, my blogging has fell by the wayside. I'll make an honest attempt at getting caught up...

The Deck - I intended on clearing the ice and snow from my back deck to create a clearing for brewing outside with my turkey cooker. I'm a lazy man, so I planned on starting up the old deck heater and letting the propane melt away my troubles. That plan failed, the heater wouldn't stay lit, and the ice is still there to this day thanks to this annoyingly snow filled New England winter.

The Turkey Cooker - I did manage to get the propane tanks filled for both the heater (useless) and the turkey cooker. I decided to pull the old Bry-Mobile out of the garage and cook out there instead, and it worked out pretty well. My first garage brewing experience, and it seemed to go pretty well... 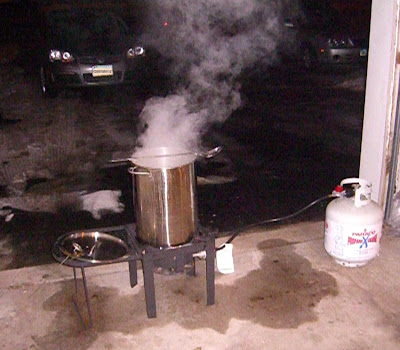 Have garage, will brew... Note the ice covered driveway...
The Wort Chiller - I also was hoping my buddy Dave G. would come over to help me brew and would also be kind enough to bring his wort chiller... Dave never showed up, nor did his chiller. Come to think of it, I haven't even heard from Dave in over a week or so... Hope he's OK.

Kenn did show up, and he was kind enough to bring his own wort chiller, as well as some sampled of he first handful of home brews. I'll go into more detail on his brews in a later post, but over all, not too bad... 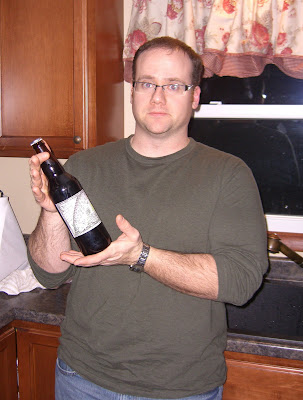 Kenn shows off one of his home brews... Not too shabby...
Using the garage was convenient because it gave of access to two things.

1. We had quick access to the hose spigot, perfect for feeding the chiller cold water. Although, as Kenn was quick to point out, the water would eventually coat the driveway and add to the ice. He was right, but ehh... What ever... It'll warm up eventually. (Did I mention my mother's car and the cable guy's truck may have slide down the drive way later in the week... While in park...)

2. We had access to plenty of snow, which I was curious to see in action as an assistant to wort chilling. 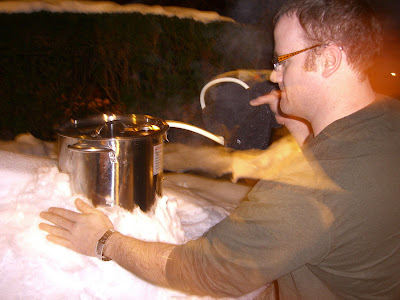 Kenn packs the snow around the hot brew pot
while keep the wort chiller hose from getting dirty...
When the time came, Kenn and I hooked the wort chiller up and let it do its thing while nestling the brew pot in a pile of snow. I'm not sure how helpful the snow was, but it didn't seem to hurt. 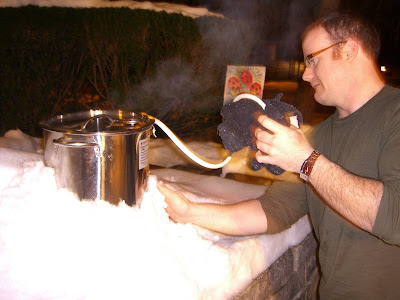 Kenn did a fine job of using the little snow bank
on what was once a planter on my front step.
Perhaps I'll grow hops there in the spring...


Kenn was having some trouble unhooking the nozzle from the garden hose in the video above. Note the "You are trespassing!" sound in the background. Part of my houses vast security network. The place is a impregnable fortress.

We eventually gave in and moved the pot closer to the spigot... OK, I gave in, and Kenn moved the pot... Oh, and Kenn is the strongest man in the world, and is not harmed by heat, cold, nor any of the elements. It's true, look it up in Wikipedia...


Kenn and I enjoyed his home brew offerings and the last of my Franken-Brew, which I will comment on in a future post. All in all, we had a good brew session, but in the end, the proof is in the pudding, or in this case the brew...

Oh, by the way... If you recall, I gave the wife the night off, and she went out with a girlfriend and left me home with the boy. He was perfect, out like a lamp at 7 p.m. and didn't make a peep until the next morning. Even with the brew kettle boiling away in the garage beneath his room.

Next post, my second try at using a secondary... And the curious case of the misbehaving bung hole... Stay tuned!
at 9:23 PM 5 comments