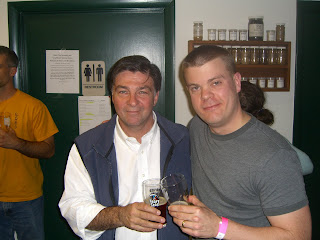 Clipper City is a big supporter of wounded war vets,
so Hugh Sisson and I toasted to that fact after the tour.
Continuing with my Baltimore/DC area beer adventure, a friend and I drove out to Clipper City Brewery last weekend to catch a tour. I was amazed that the man himself, Hugh Sisson, was on hand to guide us through the inner workings of his production facility. Apparently Sisson handles most of the tours there. 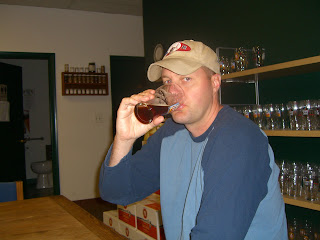 My buddy Jesse decided to join me and experienced his first brewery tour.
For $5, you get a commemorative logo pint glass and 5 tokens to exchange for 5 samples from either the Clipper City, Oxford Organic Ales or Heavy Seas product lines. I spent my tokens on the various Heavy Seas beers available from the tasting room that day. Unlike some breweries, you're encouraged to top off your glass and bring it along on the tour with you. What could be better than enjoying a tasty brew, straight from the tap, while walking through the facility it was just freshly made in, during an up close and personal tour from the head of the brewery? Honestly, how cool is that?!? 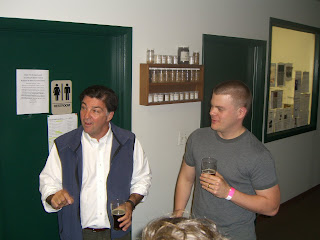 Hugh Sisson and I chat with some of the other guests after the tour. 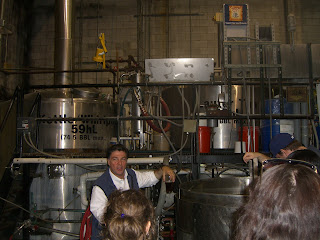 Sisson shows us how the brewery works.
Sisson did an excellent job educating his audience, not just about his own beers, but also about craft beer in general. He ran us through the brewing process, providing a great tutorial suitable for the seasoned brewery tourist and brewery-virgin alike. Covering a multitude of topics, Sisson stressed the importance of quality ingredients, beer styles and food pairing, proper pouring methods and the dangers of drinking straight from the bottle. He also explained the concepts of balanced beer, fireplace beer, organic beer, and beer economics. 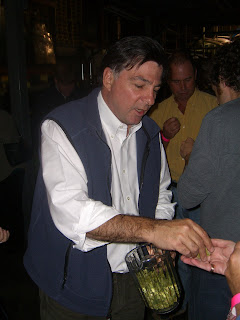 Sisson hands out hops and gives us the skinny on their contribution to flavor and aroma.
After the tour, Sisson mixed and mingled with his guests in the tasting room, enjoying a beer and friendly conversation, often talking one-on-one with us. Over all, it was very educational, down to earth and fun. Hugh Sisson successfully created an association between his "Joe the Brewer" persona (my words, not his) and the tasty beers he provides.

Bottom line, Sisson sells his beer by selling himself. 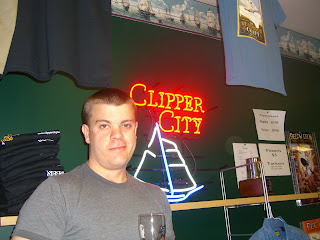 Good times!
I was a big fan of the Loose Cannon Hop3 Ale, hoppy but smooth, simply a great beer! Sisson showed us how Loose Cannon is hopped in the kettle, again in the hop back, and then finally dry hopped, hence the Hop3 name...