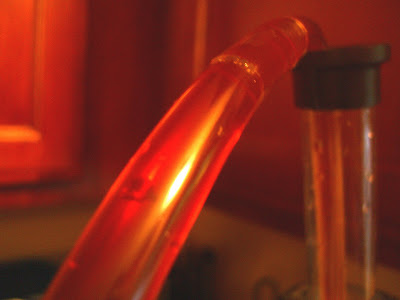 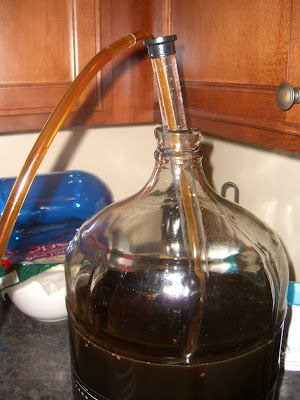 Yesterday was yet another chapter in the ongoing saga that is Franken-beer. Bottling day! If you recall, this was intended to be an Oktoberfest inspired Ale, based on a poorly chosen recipe found on beertools.com. After seeking out feedback from the homebrew-blogosphere, I learned that it was closer to an Altbier. 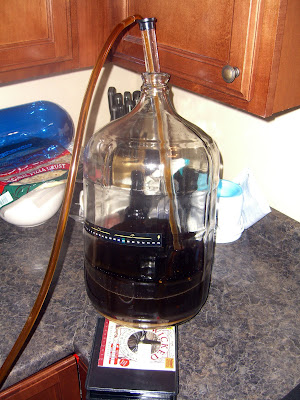 Tip: "Wiked" the musical (from the library) also doubles as a great secondary wedge... 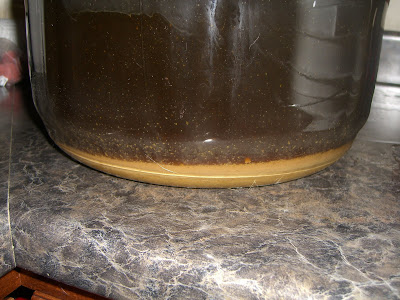 I was surprised by the amount of sediment at the bottom of the secondary. But this is the first time I ever used a secondary, so this maybe typical... (hint hint, feedback anyone?)
After picking the wrong recipe, surviving a slow fermentation process, doing my best to keep the temp down, and plopping my bung into the secondary, I finally reached bottling day. Just to keep things interesting, I decided to try out a new gadet, the Tap-A-Draft 'keg' dispenser kit. I'm sad to report that my kit was short one cap, but it wasn't a show stopper. I intended on only using 2 out of the 3 of the 6 liter bottles so I could put the rest in a case of flip top bottles for smaller samplings. The jury is still out on the Tap-A-Draft, but it certainly cut my bottling time down. I really hope this setup works out, it could be very convenient. 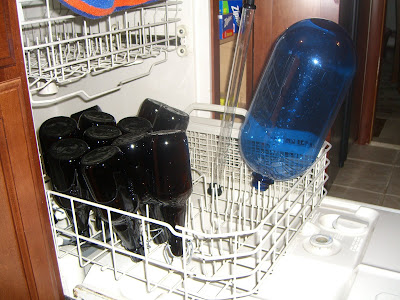 I hate the sanitizing. Tip: Use a freshly cleaned dishwasher as a dry rack! 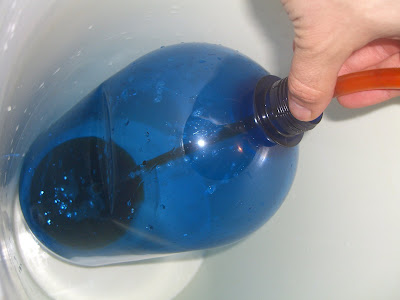 Hippity-Hoo Tap-A-Brew! The bottom of the Tap-A-Draft bottles are round. Not a good design. You need to use the old fermentation bucket to keep the bottles upright. 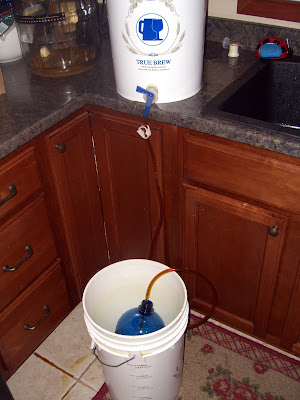 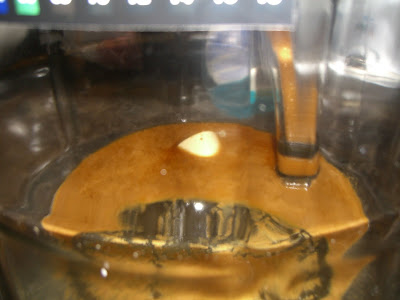 Behold! My bung amongst the murky brown bottom. (That marshmallow looking thing)

My bottling bucket needs new seals. As you can see from this clip, the spigot leaks...
I did have one other issue. My hydrometer broke open in the sanitizing bucket. Thankfully it was after most of the stuff was removed, but I had some concerns about safety. After reading up on the issue on Homebrewtalk.com and on Beeradvocate.com, I feel the risk is minimal. I'm sure I got all the glass out, just one piece, and I don't think there's any lead risk. Then again, you never know. Time will tell I guess, but you only live once. I'm throwing caution to the wind on this one. Let me know if you think this is a foolish course of action or if you think my risk analysis is dead on... Maybe I shouldn't say 'dead'... *gulp* 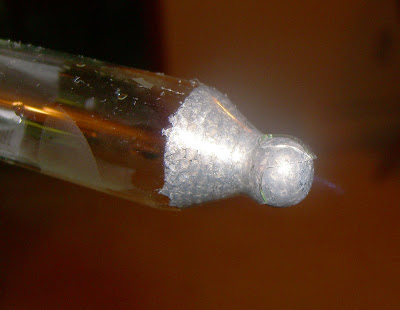 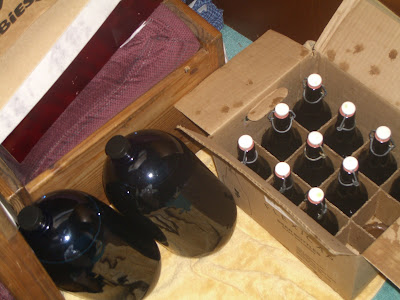 I only had enough beer to fill both 6 liter Tap-A-Draft bottles and 10.5 of last flip top bottles. That last half bottle was calling me out, so instead of capping it, I tried it. So far, I'm not overly impressed. It's much more sweet than I wanted it to be. I'm hoping the bottle conditioning followed by some fridge time changes things a little along with some natural carbonation. For now, I'll just wait and see. I plan to let the beer carbonate for 2 weeks in the same air conditioned room the primary and secondary sat in. Then, I'll just move the whole lot to the fridge. (The Alewife is going to kill me when I invade the fridge...) Stay tuned for further updates...
at 9:55 PM