Do they make generic "craft" beer? You betcha!
I remember when it was common to see rows and rows of generic products at the local grocery store when I was a kid back in the 80s. I'm talking about those "no-name brand" versions of products. For example, you may have seen cereal that resembled "Fruit Loops" but came in a plain white or yellow box, with no Toucan Sam or similar branding, just black sanserif font lettering that would read "FRUIT FLAVORED CEREAL RINGS" or something like that. Does anyone else remember that?

Well, now a days, stores have their own branding, and they've livened it up a bit. Now those same "FRUIT FLAVORED CEREAL RINGS" would have a lame second rate version or Toucan Sam in a weak attempt to full the general public into thinking they're "Fruit Loops" or at least close enough. Perhaps the logic is they help parents lie to their brand conscious kids about the food they're buying for them. "See Johnny, there's Toucan Sam, these ARE Fruit Loops!"

What about beer? Is there such a thing as generic or store brand beer, or do those Dharma Initiative folks have the corner on no-name brew market? You might be surprised to know that there are grocery store brand beers out there. I did not know myself until I stumbled upon some at Shaw's Market a couple of weeks ago. Kind of ironic that I found these beers shortly after I posed this question: Where do you buy your beer?

As a searched for something new and interesting in my groceries beer section I started to talk with the local distributor guy who was stocking the beer fridge and asked him why the store didn't carry local brews and more craft beers. His answer, "They (Shaw's) don't see the money in it."

Flash forward a few weeks and suddenly a display featuring six-packs of Metolius Golden Stone Amber Ale and Metolius Dolly Varden Indian Pale Ale appeared. Did this beer suddenly appear becasue I confronted the beer distributor, or am I just an egotistical self important dolt?

I was skeptical of these brews. I figured they were probably the latest attempt of a macro brewery trying to snag a little of the craft beer market with a off shoot branding and marketing effort to appear like a small time brewery. But maybe it would be good anyway, like Blue Moon or something. I was close, but still wrong. Here's what I found out... 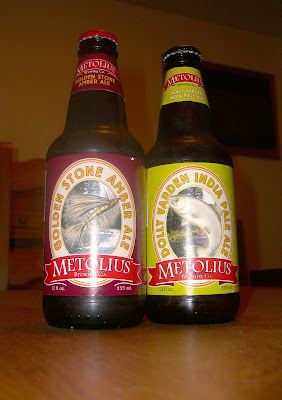 A fish and a fly fishing lure in lieu of a faux Toucan Sam...
Apparently the Metolius line of brews is made by Pyramid specifically for Albertsons, which happen to own Shaw's. This is pretty interesting considering Al Williams, a former private label product lines manager at Albertsons was one of the "founding-fathers" of all things generic in the US. (At least that's what wikipedia told me, so it must be true, right?) Grocery stores can't legally market their own beer, but they can buy exclusive brands and sell those.

Here's an interesting article aboutMetolius dating back to 2006. I guess a two year old article doesn't count as news, but it's news to me. This quote sums up the business model behind made for store beers...

SB Northwest brewer Ron Seid said he got the idea a few years ago to provide exclusive brands to the big grocery chains.

"Quality is very important to me, and our cost to the retailer is a little cheaper compared to other brands, so it's good situation for (the grocery chains)," Seid said last week from Portland, where he contracts with the Portland Brewing Co. (now part of the Pyramid Brewing Co.) to make Metolius and Fire Station 5 beers. "The stores can make a little better (profit) margin than they can on the national brands."

I suppose this is no different than contract brewers like Custom Brew Crafters that make craft beer for local restaurant chains and bars. But for some reason, I couldn't shake the feeling they were trying to pull a fast one on us. But then again, good but cheap craft beer in my grocery store is a good thing. Perhaps this is a case of guilt by association. An association with "Big Beers" tricks...

I think its safe to say Pyramid is a craft brewer, and if they're producing the Metolius beers, then Metolius would in fact be a craft beer, correct? I think Pyramid may be doing something pretty cool here... They're providing affordable craft beer to the masses, unlike the big beer companies that are simply trying to fool the masses into believing they're drinking craft beer. What do you think?

Keep in mind, craft doesn't necessarily equate to quality. I'll be sampling these two brews and posting my reviews later this week. I'd like to hear your opinions, if you've tried these or any other made for grocery store beers.
at 5:50 PM