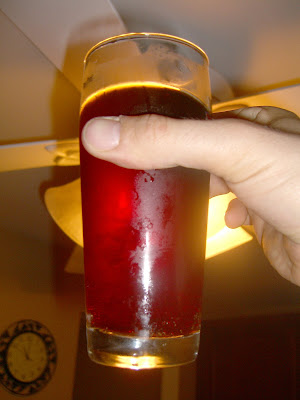 Behold the power of beer!

Awful camera work and lighting, but you can see the carbonation that was developing.
Franken-Beer has been bottle conditioning (in bottles and in the Tap-A-Draft) for about a week and a half now, so I figured I'd stick a bottle in the fridge and give it a try to see how the beer was maturing. If you recall, I tasted a some of the beer as I siphoned it out of the secondary into the bottles and it was a little sweeter than I was hoping for...

So far, I'm not overly impressed. It's much more sweet than I wanted it to be. I'm hoping the bottle conditioning followed by some fridge time changes things a little along with some natural carbonation. For now, I'll just wait and see. I plan to let the beer carbonate for 2 weeks in the same air conditioned room the primary and secondary sat in. Then, I'll just move the whole lot to the fridge. 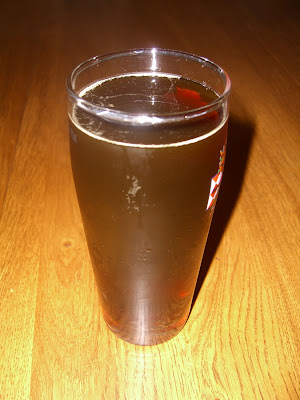 Well, it's definitely beer folks... I had my doubts...
I'm pleased to say, Franken-Beer IS in fact beer, and not just dirty brown water... After letting the beer condition for a little bit, there has been some noticeable improvements. It's still malty, but the saccharine quality has begun to mellow just as I had hoped. It's not there yet though, and I'm hoping a little more time will yield a better tasting beer with proper carbonation. I'm fine with malty, because, the original intent of an Oktoberfest inspired Ale would lend itself to a malty beer...

The German style is most often characterized by a medium to full body, a malty flavour balance, a wide range of colours, and a clean dry finish, though wide variations are notable amongst German breweries marketing Märzen. Amongst these variations are colors ranging from pale to dark brown. 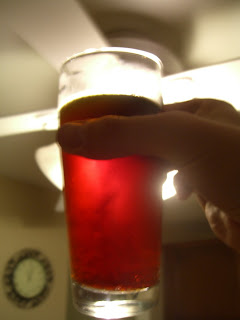 I'm not so sure about the dry finish, but I suppose the wide color range makes the makes my beer acceptable, although I think a lighter more orange/amber color would have been better. On the positive side, this is the clearest beer I've ever made, even if my poor photography doesn't make that abundantly clear. Click on the blurry image on the right for a better idea of how clear it is. I guess everyone was right about the magic of the secondary.

This video, again poor quality, gives a better impression of the clarity.
The bottle I tested had some carbonation in it, but again, yeast haven't had enough time to do their thing yet. All things in good time I suppose. With that said, I wonder if I should let it bottle condition a little longer than 2 weeks before plopping the batch in the fridge. I'm not sure another half a week will be enough time to right all the wrongs I've found in this brew.

What do you think? how much longer should I give it before I stick it in the fridge?