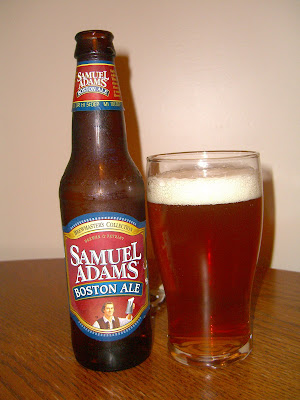 And so, my quest to review the beers found in the Sam Adams Summer Style case comes to a close with this final review. As I stated previously, I did not love every beer in the case. Some were good, others merely mediocre. The ironic thing is the Boston Lager and the Boston Ale proved to be my favorites, and I'm not really sure if they're specifically "summer style" beers.

Some words from Sam Adams:
Samuel Adams® Boston Ale was first brewed to celebrate the opening of our Boston Brewery. Like Samuel Adams Boston Lager®, it was an old family recipe that was rescued by Jim Koch from his father's attic. Samuel Adams® Boston Ale, a Stock Ale, has a complex, caramel malt character balanced with distinct spicy and herbal hop notes. Our proprietary ale yeast imparts a variety of fruit and ester notes in both the nose and flavor which are indicative of the style.

Stock Ale, one of the few classic beer styles to have originated in the United States, has a strong New England heritage. The style draws its name from the cool "stock cellars" in which it was aged. This technique imparted a smoothness and body which became the hallmark of this style.

Keeping with the Stock Ale style, Samuel Adams® Boston Ale is fermented at cooler almost lager like temperatures and conditioned much longer than most ales. It also is Krausened and dry hopped

Note: Interesting that Sam Adams calls this beer a "Stock Ale" but Beeradvocate.com says it's simply an American Pale Ale...

Style Description from our friends at BeerAdvocate.com: Of British origin, this style is now popular worldwide and the use of local ingredients, or imported, produces variances in character from region to region. Generally, expect a good balance of malt and hops. Fruity esters and diacetyl can vary from none to moderate, and bitterness can range from lightly floral to pungent.

American versions tend to be cleaner and hoppier, while British tend to be more malty, buttery, aromatic and balanced.

How was it served? From a bottle
Glass: Pint glass
Location of tasting: My living room
Reviewer: Bryon

1. Appearance - Amber in color, with a bit of haze. Fluffy head, that diminishes quickly yet clings to the glass nicely.

2. Smell - Malty, with some fruity undertones. (A note on smell - I have a very limited sense of smell, that comes and goes, so my opinions on beer smells should be taken with a grain of salt... That being said, my nose must have been working that day!)

3. Taste - Moderately hoppy, but balanced nicely with a sweet malty flavor. Apple, citrus and caramel come to mind, with a dry finish.

5. Drinkability - Very refreshing, and satisfying. Packs more "oomph" than Sam Adams Boston Lager, a nice hoppier alternative. Keep a sixer of this other go-to beer from the Boston Beer Co. next to a sixer of the Lager, just in case you run out of what ever local brew you're drinking that week. Another great session beer from Jim Koch's family recipes, weighing in at a manageable 4.94% ABV. Relax and savor a few of these over some friendly conversation. This one stole the show for me, the best brew in the box!

But what about the quasi-factual historical reference & lame connection to beer?
If you would choose to equate our founding fathers to a case of Sam Adams Summer Style beers, and specifically associate Thomas Jefferson with the Boston Lager, certainly John Adams would be akin to the Boston Ale.

Thomas Jefferson wrote the Declaration of Independence, is there any doubt he would be equated to the Boston Lager? What the hell does that mean, what did I just type?
As the last two men alive to have sign the Declaration of Independence, both men stood out from the crowd, just as these two beers stood out as the last two from the case I reviewed. Politically apposed, left and right, but bound by a mutual love for their nation, Jefferson and Adams were great men. Likewise, these two beers are separated by their bottom and top fermenting yeast, yet united in their overall quality, proving to be great beers.

Just like John Adams, the Boston Ale was the last to go...
As Adams and Jefferson approached the end of their lives, they were strongly connected through a strong re-kindled friendship and understanding, much like these two beers are connected by their caramel malty flavor and citrus notes.

As I finished the last of the two Boston Ales, I could almost hear John Adams ghost utter his famous quote, "Thomas Jefferson survives." or was it "There's still a Boston Lager in the case.." Sadly, Jefferson was long gone, and so too were the Boston Lagers...

Um, what about Sam? It's Sam Adams beer, not John Adams beer!!!
All this talk about John Adams, what about Sam Adams?
I would equate Sam Adams to the Pale Ale, a fine beer, very tasty, less known, under rated, and sadly a bit lost in the shuffle. While Sam Adams only finished fifth in his run for President, he did serve as the governor of Massachusetts for a number of years. Not as accomplished as his cousin John, but certainly an important man in our nations history.

Cheers and may God bless America!

The case includes the following beers:
at 12:49 AM