In case you missed my last post "Sam Adams: Patriot & Failed Brewer?" I've decided to to jump head first into a Sam Adam's Summer Style case and review it from bottle to bottle, in honor of the summer season, as well as our nation's revolutionary history.

Sam Adams suffered from bad luck
In my previous post, I discussed the irony of Sam Adams as a failed brewer and business man, despite the raging success of the modern day Sam Adams beer from the Boston Beer Company. But perhaps I was a little too hard on Sam, after reading a little more, it would seem that Sam had a lot on his mind in those days of failed business and brewing.

Sam and his wife Elizabeth had a run of bad luck, losing 4 children and ultimately ending in the death of Elizabeth herself. Read this section of Wikipedia for the details...

"At around this time, Adams had spent and mismanaged most of his inheritance to the point where creditors even attempted to seize his home. By 1760, Adams was bankrupt..."

Pretty horrible really, perhaps I should cut Sam a break on his poor business and brewing practices. But take heart friends, Sam would be OK, in addition to "fathering" the American revolution, he would also bounce back and start a romance with the 21 year old daughter of a friend. Way to go Sam, you old dog!

Speaking of parenthood... This transition is in poor taste...
After discussing the Adams family's (no not that Adams Family) child birthing woes, discussing my own future as a father may be in poor taste, but whatever...

We have a new baby of our own on the way, and time for preparing for fatherhood is running short. The "Alewife" gets a little annoyed if I squander my remaining time on such trivial activities as beer blogging and the like. So, the trick is to combine such activities with baby prep. This beer was enjoyed while making dinner and reading up on taking care of baby. Combining baby prep and beer enjoyment can be hazardous. I'm reminded of the IPA slushy I enjoyed while putting the finishing touches on the baby's room... 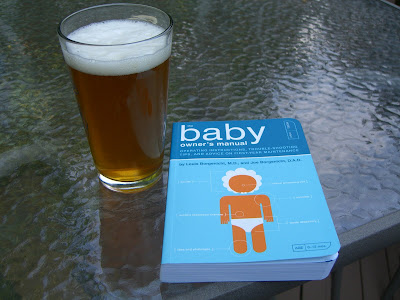 Note the copy of "Baby Owner's Manual" along side the brew.
Not a bad beer to accompany my light reading on becoming a daddy. 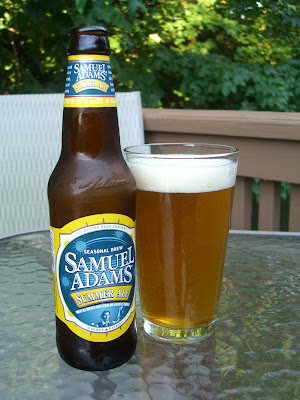 Nothing better than a cold beer waiting for you on the back deck...

Some words from Sam Adams:

Bright and citrusy, brewed with mysterious grains of paradise.
Samuel Adams® Summer Ale is an American wheat ale. This summer seasonal uses malted wheat as well as lemon zest and grains of paradise, a rare pepper from Africa first used as a brewing spice in the 13th Century to create a crisp and spicy flavor and body. The ale fermentation imparts a background tropical fruit note reminiscent of mangos and peaches. All of these come together to create a quenching, clean finishing beer perfect for those warm Summer days.

Style Description from our friends at BeerAdvocate.com: An Americanized version of a Hefe Weizen, these beers range within the pale to golden range in color. Reminiscent of a Hefe Weizen in appearance, unless filtered. Long-lasting head with a light to medium body, higher carbonation is proper. German Weizen flavors and aromas of banana esters and clove-like phenols will not be found. Most use a substantial percentage of wheat malt. Hop character will be low to high but most are moderate in bitterness. There may be some fruitiness from ale fermentation though most examples use of a fairly neutral ale yeast, resulting in a clean fermentation with little to no diacetyl.

Often served with a lemon wedge (popularized by Americans), to either cut the wheat or yeast edge, which many either find to be a flavorful snap ... or an insult and something that damages the beer's taste and head retention.

How was it served? From a bottle
Glass: Pint glass
Location of tasting: On the back deck
Reviewer: Bryon 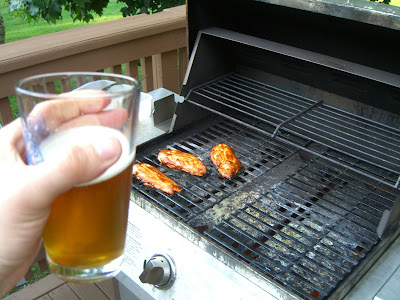 I don't love this beer, but it is a great compliment to hot weather and BBQing...

On to the Review

1. Appearance - Pale golden yellow with a bit of haze, looks like liquid wheat. Topped with a moderate head, slight lacing inside the glass.

2. Smell - This beer nearly flew below my nose's radar. Sweet, perhaps fruity (lemon?) aroma. That's about it. (A note on smell - I have a very limited sense of smell, that comes and goes, so my opinions on beer smells should be taken with a grain of salt... That being said, my nose must have been working that day!)

3. Taste - A mild sweet wheat flavor, punctuated with a lemon zest twang, low to no hops, and something else, something peppery... Could it be the "grains of paradise" that I detect?

Some words on the "grains of paradise" from Wikipedia...

"In West African folk medicine, grains of paradise are valued for their warming and digestive properties. A. melegueta has been introduced to the Caribbean Islands, where it is used as medicine and for religious (voodoo) rites." 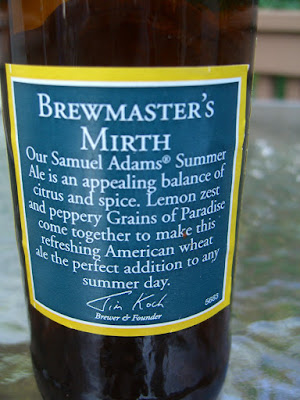 The label says it all...

5. Drinkability - This brew confuses me. I really enjoyed it when I had it on tap at a few local pubs. A good beer to enjoy on the bar patio on a hot day. But I did not love this beer out of the bottle. Certainly still a refreshing and very drinkable beer, but it didn't do it for me. That being said, I could still have quite a few, but mostly because it goes down so easily, not because I'm in love with it. Did I mention I don't love this beer?

Drinkability Scale from 1- 10: 7.5 (But that a score given begrudgingly) 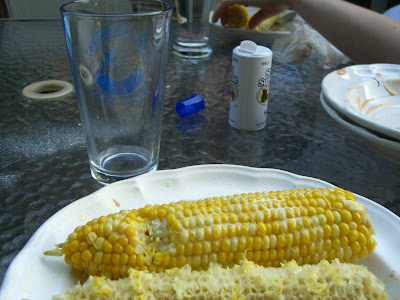 The beer is gone, as is the chicken... Time to go inside... Enjoy your summer!

The case includes the following beers:
at 10:09 AM