My four day weekend is coming to a slow and uneventful halt. As I prepare to start the next 11 day work week, I can't help but feel disappointed.

What's a guy gotta do to get a beer around here?
I attended three different BBQs this weekend, none of which had beer available. No beer on Independence Day?!? What would President Washington think? Granted two were church related BBQs and the third was a birthday party for a one year old, but still, not a beer to be found at a single gathering! I also didn't get the time to home brew this weekend. Nor did I manage to connect with Dave to give him a chance to sample the IPA we made. I better hurry, it's going fast! I was also hoping to sample Dave's Hefeweizen but no luck there either.

Prepping for baby
In between attending beerless gatherings over this holiday weekend, the "alewife" and I spent a fair share of time prepping our home for the arrival of our son. Our first child is due in early August, and getting the house ready trumps my desire to brew more beer. So, I made the best of it... 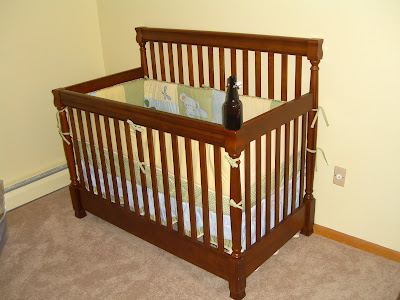 Nothing says, "Happy Independence Day!" like cribs and beer-slushies...
I spent the better part of Friday, assembling the floor model crib we purchased without the benefit of proper tools or instructions. At one point, I actually had to use a butter knife in lieu of a screw driver. With that process well under way, I decided to add the element of home brew to my efforts. I had to run down to the basement and grab a few IPAs for the fridge, and stuck one in the freezer to cool it rapidly. Apparently, the freezer works a little too well...

New invention, the beer-slushy?
I opened up the freezer after a short time, and cracked open the IPA. As I tilted the bottle to pour the beer into the pint glass, only little trickled out. The top of the beer was frozen. What's a guy to do? Can you say, beer slushy?

I stuck that same butter knife I use on the crib into the bottle and broke up the frozen beer chunk blocking the way and it all came rushing into the glass in an icy and foamy splash. All the commotion lifted the yeast and sediment from the bottom of the bottle, causing my icy IPA to be a bit cloudier than normal. I had a choice, pour it out, or go thirsty. Would it have been home brew blasphemy to drink it? What would you have done? If that's wrong, I don't want to b e right! 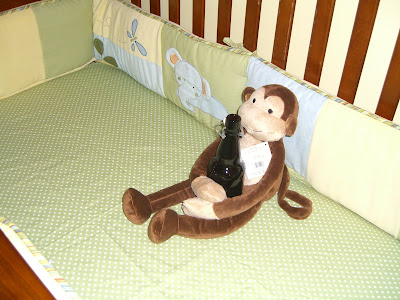 No monkeys or beers were harmed in the making of this crib...
It still smelled good, it certainly was carbonated, and I was thirsty. So, I did the only thing I could do, I enjoyed my very first IPA flavored slushy. Actually, it was pretty good, despite the cloudiness and overzealous head. I need to remember this little anecdote so I can share it with my son when he's old enough to appreciate how goofy his old man can be.
at 4:47 PM