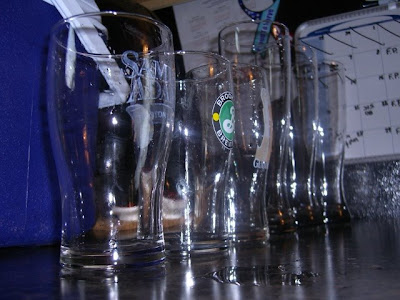 Gentlemen, start your engines! Pints for the IPA and Weizen glasses for the Weizen...

Dave and Kenn finally got the chance to come over and try out the IPA we made. Keep in mind, this was Dave's very first home brew, and he did a great job. I was beginning to feel a little guilty as I was sharing his first batch with folks from work, and enjoying a few on my own. (As a matter of fact, I'm sipping one on the back deck as I grill up a steak and type this blog post...) 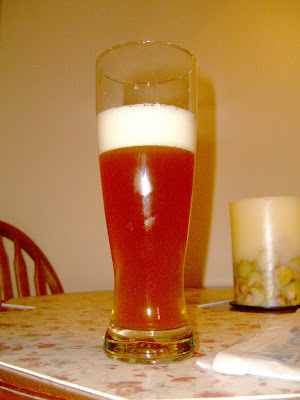 Dave's Weizen, begged to be cooled and then enjoyed.
Dave enjoyed brewing so much that he brewed a second batch all on his own a few days after we made the IPA. His second batch (& first solo batch) was a Weizen, and he was kind enough to bring a small cooler full of those brews for us to sample as well. However, the cooler had no ice in it, and the beer was warm. 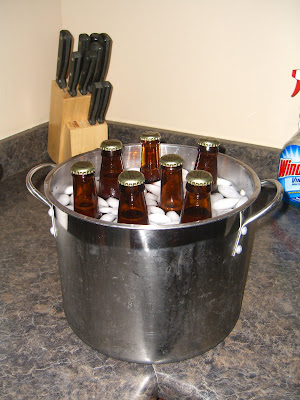 Warm beer sucks...
Myth Busters to the rescue!
We decided to chill the Weizens using a method discussed on Myth Busters. Thought to be one of the most rapid methods of beer chilling, we decided to cool our brew with a bath of water and ice. It worked rather quickly, but while we waited we sampled the IPA.

Dave's first bottle of his first home brew... Success taste pretty good!
A bit of irony
We were discussing the pros and cons of flip top bottles versus traditional bottles and capping. I hate capping, but Dave was quick to point out he had almost no flat beers on this particular batch, which he bottled and capped the old fashioned way. As he made this statement I opened his cooler and saw a bottle half empty that had leaked a bit. So much for the all mighty capper! And for the record, he had at least one flat brew too.
Poor Kenn, he opened a quitter! I hate quitters! 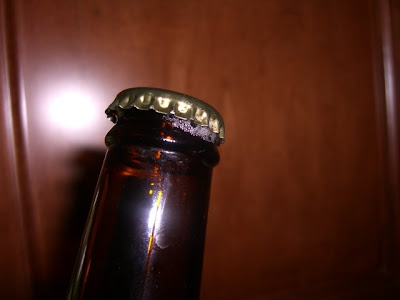 Exhibit A! Note the leaking foam... 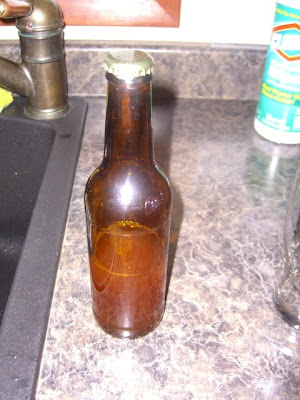 A leaky quitter of the worse sort...

They weren't all quitters! This one had some fight in it...
The Verdict?
Carbonation mishaps aside, the Weizen wasn't too bad for Dave's first solo batch. Not bad at all... In retrospect, we should have sampled the Weizen before the IPA. It's difficult to enjoy a more subtle beer after having a hoppy selection like the IPA. That being said, I was very impressed with how quickly Dave has taken to the hobby, and I look forward to more brew swapping and joint brewing adventures in the near future. There was some talk of an Oktoberfest in our future.

Side note: All of the carbonation issues reminded me, I still hate capping. I think it's time to look into kegging! 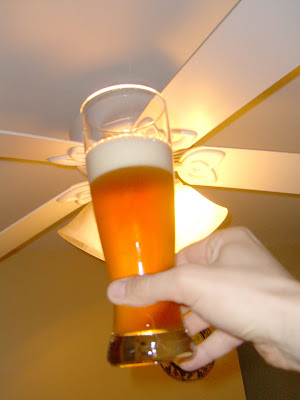 Behold Dave's solo brew in all it's splendor and glory!

The gateway drug of IPAs...

What about the IPA?
As for the IPA, Kenn hated it, but he hates IPAs... Dave liked it, but thought it needed more hops. I liked it over all. Not over the top, but hoppy enough to have character, a sort of IPA for beginners... My First IPA by Fisher Price? Bottom line, it's an IPA non IPA drinkers might like, a gate way drug of sorts...

Off to Eli's
After we tried a little of each beer, we headed out to Eli Canon's in Middle Town to hit up the tasting, which was canceled. So, we ordered some extra crispy hot wings, a few burgers and couple of brews from the beer menu. If you happen to be in CT, around the middle of the state, give Eli Canon's a try, they have a pretty good beer selection and tastings on most Tuesdays.