Spreading the joy of homebrewing Part 2 - The first tasting (IPA)

Earlier in the month, I took the time to teach a buddy (Dave) how to homebrew, with the moral support of another friend (Kenn).

My goals were two fold:

Mission accomplished on both accounts! And in the process we decided to thumb our collective noses at the hop shortage, and brew up an IPA.

Today, after a long day at work, and after passing my physical fitness test (I'm in the military), I decided to crack open the first bottle and test the brew. If all went well, I'd bring a 6 pack in to work this weekend and share it with some gents about to be promoted...

Not too bad, but it may need a little more conditioning. Amber in color, slight haze, and a delightful creamy head that clings to the sides of the glass. The hops are apparent, but I could use a little more... (When did I become a hop-head?) The malty flavor adds balance, with a buttery/biscuity finish. This coupled with the "moderate" (moderate for a hop-head) hop level will make this an approachable IPA for those of my friends that aren't quite hop-heads yet. 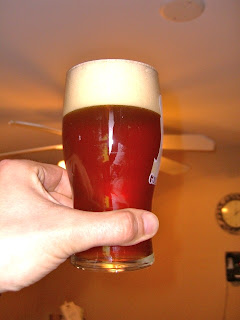 Not awesome, but not too bad either. Very drinkable, and would serve as a good "bridge" IPA to indoctrinate a non-IPA loving beer drinker. Would like to try making something similar, but with more hops, and oak barrel age it. Some day...
at 5:30 PM

Email ThisBlogThis!Share to TwitterShare to FacebookShare to Pinterest
Labels: Learning to brew, spreading the joy