I just flew home from a week out of town on business, and boy are my arms tired... (cue the snare drum...) No but seriously folks, I really did just get back from Little Rock Arkansas. While I was out there, after my long tedious days in training were over, I took a little time to enjoy the beer culture the area had to offer.

I didn't really take copious notes, do any formal beer reviews, or even take any photos on my little excursions, but here's what I can remember of my time in Little Rock... Flying Saucer in the River Market area of Little Rock is a great if you're looking for a nice place with an awesome beer selection. It's located right on President Clinton Ave, and you gotta wonder if Slick Willie himself ever had a pint there... The place has a ton of space, and a wall of taps, not to mention a huge selection of bottled beers as well. I started the evening with a Chimay Grand Reserve and an outstanding club sandwich...

Chimay Grand Reserve - Deep amber brown with a full creamy head. Malty with citrus undertones, a nice well balanced beer. A tasty brew to say the least, but the young lady in the catholic school girl's outfit that served me warned me not to steal the Chimay glass it came in... After all, what would the monk's think?

We were there on a Monday night, which means the beers on tap were all $2.75 (all day and night) what a deal!

While I did not get the chance to visit Diamond Bear Brewery, I did get an ample opportunity to taste a few of their beers at various locations in the area, the hotel lobby not the least of them.

Their Honey Weiss was OK... A little light for me, but perhaps something suitable for cooling down on a hot summer afternoon. Their Pale Ale was an all around solid beer, but I think I've been hitting the IPAs a little too much as of late. I really needed something with a more robust flavor, and their Presidential IPA fit the bill nicely. 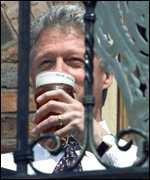 This was the last beer I had in Little Rock. I grabbed a pint on a whim at the air port last night while I waited for my flight home. That hoppy kick in the pants I was looking for was found in this full bodied, but well balanced beer, packed with flavor.

They really do have a thing for Bill Clinton down there... If I had the time, I would have elected to have another off the tap. FOUR MORE BEERS! FOUR MORE BEERS! (Just kidding, I liked the beer much better than the man... But I digress, it's all about the beer not the politics, right? Lighten up!)

I also enjoyed a tasty Bombay IPA and a Downtown Brown at Boscos, also in the River Market area of Little Rock. Both were very tasty and went down easy in the baking sun and humidity on the back deck overlooking the river front. Some of my co-workers decided to get the sampler, and luckily for me, a couple of them proved that they were not real beer lovers. More free samples for me... Pretty good beer overall, but the food was a little expensive. I think they're going for the more upscale thing with the food, hence the prices, but they do a nice job of pairing the food with the beer... Cool stuff...

Also during the week, I devoured a medium meatball, mushroom and Canadian bacon pizza over a few IPAs brewed and served at Vino's. This is a very unique place, think artsy college coffee shop vibe (complete with local art work for sale on the walls) mixed with a combination of a big city pizza dive and a small local brew pub.

The place was small and crowded, yet finding a table was not an issue. We sat next to the glassed in brewery section. And we were lucky enough to get there before the long line out the door formed up. You go straight to the counter when you walk in and order a slice, or a pizza and what ever beers you want. They do eventually send out a waiter to check if you need refills, and we were more than happy to take them up on that offer.

Their Pinnacle IPA was pretty good, but there Fire House Pale Ale was a little under carbonated for my taste. It may have been an issue with the keg they were serving from. But from what the locals were telling me, the IPA is such a big seller, that they can not keep up the production level required to meet the need. The pizza was OK, with a home made feel to it, but not great. Then again, I live in the North East, pizza mecca of sorts. I may have set the bar a little high for pizza...

And that pretty much sums it up... I encourage you to check out the local beer culture where ever you find yourself on your next business trip. It's fun and makes for a much less boring week... But please, bring a buddy and use the hotel shuttle, it's safer and will make for a more enjoyable evening...
at 3:21 PM