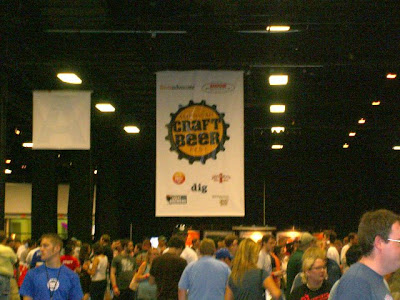 Attending the American Craft Beer Fest came at a cost... A 4 hour round trip with today's gas prices, 45 minutes in line, $40 spent each (not including parking, food, and the previously mentioned gas), soar feet and some serious exhaustion and even a little dehydration...

Was going to the American Craft Beer Fest really worth it? I've had a full night's sleep to and plenty of time to ruminate over it and I can honestly say, YES IT WAS!

I posted my initial thoughts last night here, but I think Kenn summed it up perfectly when he said... 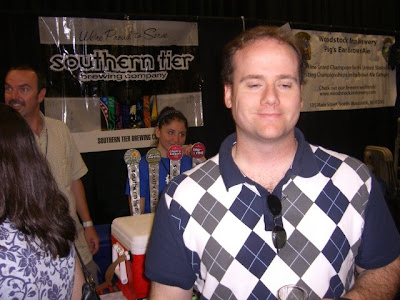 Getting there not half the fun, but not bad...
Logistically, getting to the fest was a breeze, traffic was light, parking was ample, and the ticket purchasing and line waiting portions of the day were very tolerable. Parking was ample, anywhere from $10 - $12 for the day, or if you had plenty of change in your car, you could fill a parking meter and get enough time for the session for about $3-$4. Next year, consider bringing quarters.

The mean man scares me daddy...

I caught a brief glimpse of Todd Alström, while I was purchasing my ticket, and really wanted to say hi and snag a photo op with him. But he was really busy, and I wasn't sure he ever forgave me for that time I mistakenly broke his forum rules and "pimped my blog" there. He had given me a stern talking to, and there's only so many Mia Culpas a guy can give... Actually, I'm kidding... Todd was very gracious, and forgiving... I'm really just a little afraid of him and his facial hair, not to mention that crazed look in his eyes... LOL!

Who are these people?
Waiting in line gave us a chance to size up the crowd we would be spending the early afternoon with. We decided that if you "added everyone up and divided by how ever many folks were there" you'd get an average guy in his mid to late 30s with moderate to high beer knowledge, looking to broaden his horizons a bit and have a good time, essential someone much like myself. Now don't get me wrong, there was also a fair amount of female beer drinkers in the crowd, as well as some older and some younger folks. One guy commented that this would be the place to go if you were a single lady looking for a guy. Especially if your idea guy loves beer. So there you go ladies, this may be the venue for you! 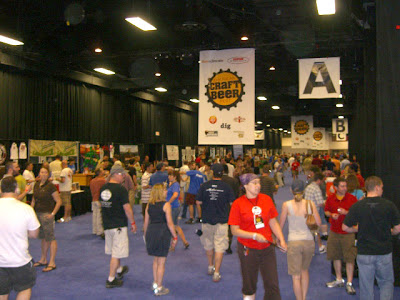 Tons of beer and tons of people...
Can you feel the excitement?
There was a very tangible sense of excitement in the crowd, waiting for the doors to open and the event to begin. Everyone was nice, I did not encounter a single drunken idiot, not even in the mirror! As the crowd got larger, and the room got a little louder, folks remained calm, jovial and courteous. If someone bumped into you, they smiled and said they were sorry. Unplanned discussions on various beer related topics would pop up between small groups of friends and complete strangers alike. It wasn't uncommon for a random person to say, "Hey have you tried this beer yet? You gotta try it, it's perfect!"

There was a wide variety of beers and breweries to choose from. Some had longer lines than others, but the lines moved quickly. The good folks serving up their beers were more than happy to discuss the finer points of products to help educate.

Unsung heroes we salute you!
The real unsung hero of this fest were the lowly rinse bucket swappers. Now I don't know if that's and official title, but that's what I called them. In between samples, you go to one of the many rinse stations set up through out the fest. There you find 4 cooler jugs of clean water to rinse out your sample cup with. After swishing a little clean water around, you dump it into a bucket. Those buckets quickly filled with a mixture of beer, water, and what ever other unpleasant substances folks decided to dump in them. And they filled up quickly. This is where the lowly rinse bucket swappers would swoop down and save the day by changing out those nasty buckets and refilling the all important water jugs. With out them, the fest floor would be a sticky, stinky mess and it would be nearly impossible to get a quality untainted sample. Heroes I tell you, heroes!

What did we get out of this day?
We got the chance to hit the open road, leave town and have a little adventure. Once at the fest we got to try a wide variety of beers in styles we may not have been overly familiar with. Kenn learned that he really enjoys Porters and Stouts, but not so much the Imperial Stouts. I got to try some interesting things like blended beers, oak aged beers, etc...

Beers of note from my point of view were:
My thoughts on twittering the event
So I gave Twitter another try, and sorta twitter blogged my way through the fest... Looking at the text messages I sent, I'm not sure if this little service I provided was of any use or entertainment value to anyone who may have checked it out.

That being said, it served a purpose for me. I didn't need to take extensive notes to remember the event. The twitter updates serve as memory joggers for me the next morning. That being said, there's only so much you can say in a sentence or two while typing on your cell phone, especially if you have clumsy monkey hands like me... 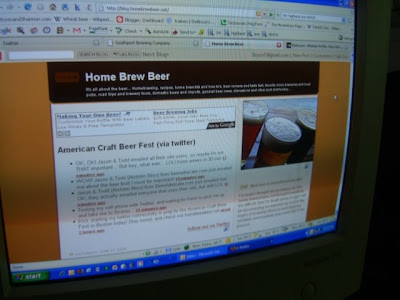 My free-form Twittering amounted to a lot of gibber jabber to someone that was not there next to me all day long. I need to take a more organized approach next time. But all those people, all that beer, it was all very distracting, and a lot to encapsulate via twitter updates... Besides, the more I typed, the less beer I could enjoy...

Next time I'll bring extra video cards and get a couple short interviews as well... It was a learning experience, but over all, still a lot of fun...
at 7:39 AM