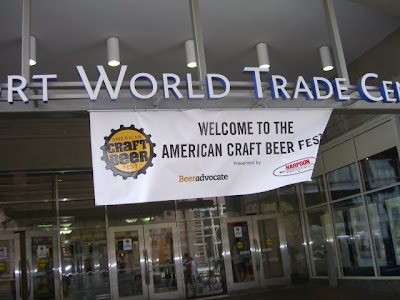 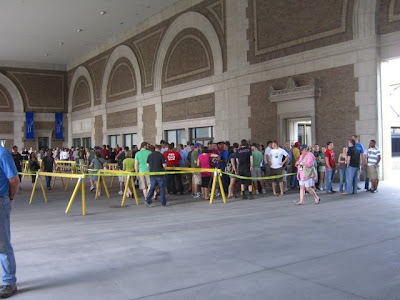 I just got back from the American Craft Beer Fest in Boston, and boy are my arms tired! Somethings I learned the hard way: 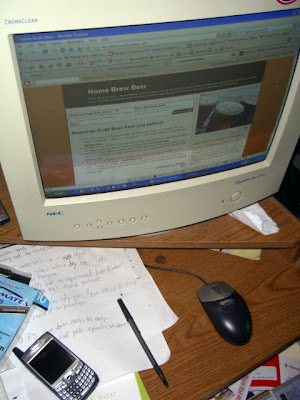 Twitter updates seemed like a good idea, but in retrospect, I'm not sure...
What do you think? Was it worth while doing the Twitter thing?
All that aside, I had a blast! If you get a chance to attend one of the beeradvocate.com sponsored beer fests in the future, I recommend you take advantage of the opportunity. This was a great chance to sample a wide variety of beer, and hang out with some great folks! 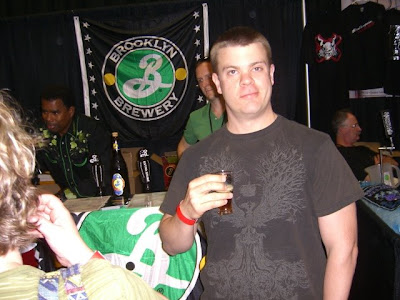 Look, it's Garrett Oliver, no really, that's him! He poured me a beer!
My first stop was the Brooklyn Brewery table. Garrett Oliver poured me a beer and we chatted very briefly. Kenn tried to get a photo of us, but my camera was a little slow, so I got the photo below with Garrett right before he went on stage to give his talk. A very approachable guy, but I'm not sure what he was thinking with that cowboy shirt. Are those hops? LOL! That being said, my second chin decided to pay me a visit for this photo. Good times! 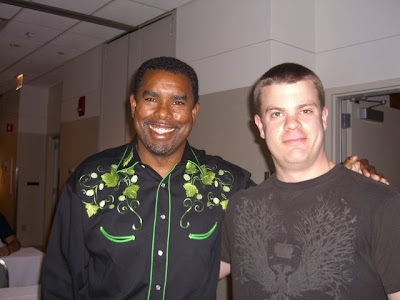 What's worse the shirt or my double chin???
The folks at Flying Dog Brewery continue to impress me with their kindness. I recognized Steph, that kind and generous young lady from Flying Dog, that continues to send me samples for my reviewing purposes. They were kind enough to let me go behind the counter, breaking a ACBF rule, so I could get a photo with them. Thanks guys, you're the best! 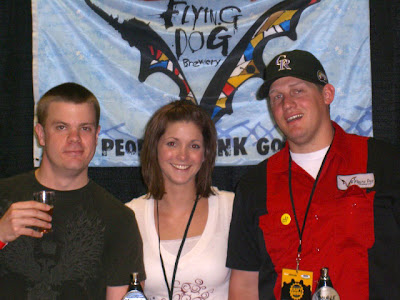 Flying Dog Brewery, by far the nicest people I've had the pleasure
of meeting in the beer industry to date!
Thanks for all the samples Steph, please keep them coming... 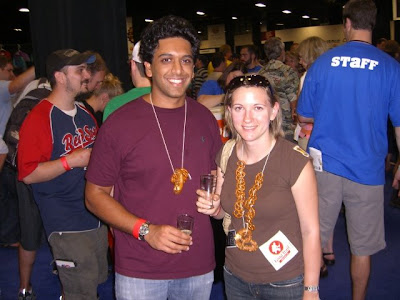 I have no idea who the folks pictured above are, but I was very impressed by their pretzel necklaces. Although if one had a pretzel necklace and the other a mustard necklace it may have been a little more impressive. A few folks had these edible pieces of jewelry on them, a great idea for the fest. A few other folks had necklaces that would hold their sampling cups for them, brilliant! I really needed something to keep my cell phone close but out of hand... 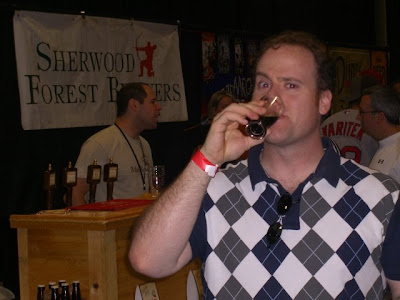 The four hour window for the session created a false sense of urgency. "We only have 4 hours, we need to try everything, and fast!" In reality, 4 hours was more than enough time to try what ever you wanted. But I think if I were in charge, I'd make it an all day event for the same price. I think folks would take their time more and really think about what they were drinking. I'm not saying folks weren't, but with four hours, and so many beers to sample, I could see how the samples could creep up on you... 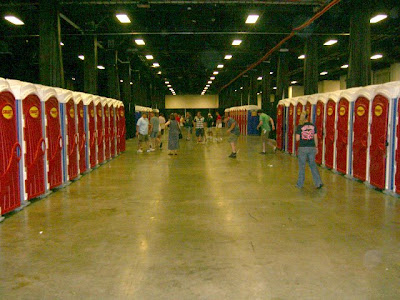 American Craft Beer Fest's dark secret, the hidden crappers!
All that "recycled "beer has to go somewhere folks!
Out houses inside... Who da thunk it?!?

What no one wants to talk about... The dark underbelly of the American Craft Beer Fest consists of a rows of secret out houses. In door out houses, no less... Oh the horror! Actually, I would have expected that finding a place to relieve myself would be a challenge, but not the case. These guys are pros and planned accordingly...

While exploring the dark underbelly of the fest, I decided to do a quick interview of two fest volunteers. "How do you like working the fest, is it something you'd do again or recommend to others?" They seemed to like working the fest, but my camera card ran out of space. We may never know how this interview ended... But seriously, there were a lot of folks working to make this a great event. Some even had the pleasure of dumping out the rinse buckets... Not glamorous, but critical none the less. Let's give all those worker bees a big round of applause! 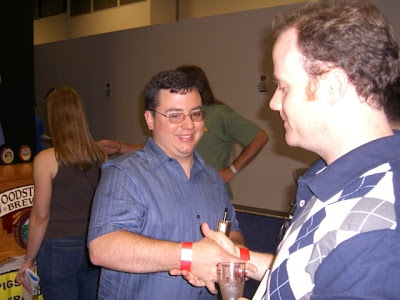 Kenn's brother showed up, he's a real beer geek...
Is that a secret family hand shake?
Kenn and I have very different tastes in beer, but with so many choices, it really didn't matter. We even found a few beers we could agree on... 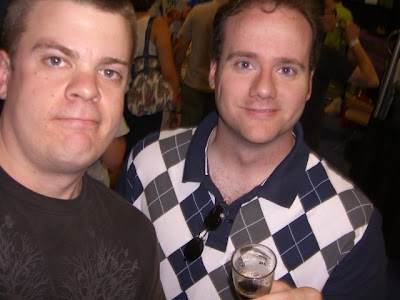 A very special moment, Kenn (who likes malty beers, and I (a recently converted hop-head), found a beer we could both agree on... Terrapin's Oak Aged Rye Square, bold but balanced! Good stuff! 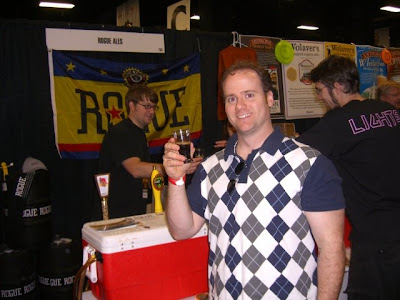 Kenn, the English teacher who likes a good stout,
enjoys a Shakespeare Stout from Rouge...

While Kenn was getting cultured, I had to try the Hop Obama. I never pass up a novelty that involves politics and beer, even if the brand of politics differs from my own. But I gotta ask, where are the McCain Ales? What gives here people? Conservatives dig quality beer too... I decided to reach across the aisle and try one of these tasty, left leaning, hoppy brews. Not bad, not bad at all! I had a Presidential IPA (a beer made in honor or Bill Clinton) last week in AR, and now this week a Hop Obama... What has become of me? 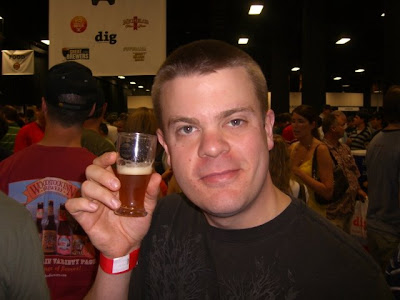 This is me, having a Hop Obama... Tasty, good stuff...
"Yes we can," enjoy a beer despite our political leanings!
Ah, look at that hopeful look in my eyes...
I like the beer better than the politician.
Why don't they make conservative beers?

This was a great event, but I'm tired. This is a short post, because I'm frankly out of energy...

Next year, if I attend, I'll get a hotel room in the area and make a night of it. I will say that 4 hours of beer sampling exhausted me. I must be getting old. I could have used a nap after the session, to get my second wind, before taking on the city. Kenn and I hiked over to the Bell in Hand for one more beer and some wings before heading home. 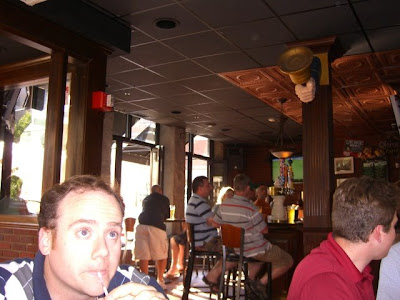 Kenn hydrates at the Bell in Hand...
All things considered, I'd say a good time was had by all... If you get a chance to try a fest like this in the future, by all means do so... It offers you a great opportunity to explore your beer tastes, try new styles and new breweries. Give it a try! Some final thoughts (a day later) here.