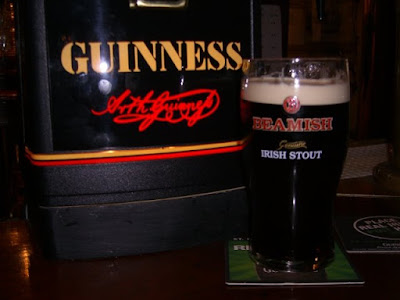 This year I celebrated St Patrick's Day at the Old Dublin, in Wallingford, CT with a buddy. It was a low key night filled with corn beef, cabbage, Irish Stout, and friendly conversation. I decided to take this opportunity to sample the "Big Three" in Irish Stouts and do a simple comparison.

The bar was packed, so it was not conducive to do a full on run of beer reviews, so I simply enjoyed the beer and made some mental notes for later. Although I did snag a couple clips of bar tender (sorry can never remember her name) as she poured our first pints of the night.

It must have been meant to be, as the only two seats open in the place were right in front of the Beamish, Guinness or Murphy's taps... I'd say it was the luck of the Irish, but I'm actually Scottish. Serendipity none the less!

In a nut shell, Here's how I stacked them...

Overall, the three were quite similar, dark as night with an inviting creamy head, mild pleasant roasted flavor, and lighter than one would expect had they never enjoyed a good Irish Stout.

In any case, all three worked just fine with my traditional corn beef, cabbage and potato meal. Is this a cliche? Sure, but no more so then turkey, stuffing and a tastey brown ale on Thanksgiving. No, I prefer to think of it as a tradition, rather than a cliche, plus it could be worse, it could be Bud Light and green food coloring! EehGad!

What did you enjoy this St Patty's?

The irony is, I finished off the night with a couple pints of 10 Penny, you know, that local CT Scottish brew!