Harpoon Brewery in Boston challenged Brooklyn Brewery in New York to a Super Bowl bet...and lost. With the Giants win over the Patriots 17-14, Harpoon had to let Brooklyn tap their lager at the Boston brewery.


Either way, this is a pretty cool deal. I think it's great that the two companies could have a fun bet. It's good that they don't take themselves too seriously. Besides, this is good publicity for both companies, a win-win...
at 7:13 PM 2 comments

Where do the candidates stand on home brewing?

I've decided to contact some of the remaining Presidential candidates today (via their web sites) and ask them a few questions about beer and home brewing. I hope that someone from their campaign staff at least takes the time to read through these and respond. Check back later to see if I get any responses. Now onto the questions...

Q: A number of states still have laws that date back to prohibition, banning the hobby and craft of home brewing. If elected what will you do about that?

Q: We hear a lot of talk about reducing the prices of energy, particularly oil, but what about the prices of hops and barley? These rising prices are hitting the American consumer in the wallet, if elected what will you do to help with this issue?

Q: A number of states are levying higher taxes on beer; ultimately this hurts the consumer and the industry. What are your thoughts on the subject?

Q: A question often asked is, "Which candidate would you most want to have a beer with." Do you enjoy quality beer, and if so, what is your beer of choice?

Erik incorrectly identified his beers, but ultimately chose the Boston Lager, kind of...

This Aint the Bud Bowl: Brooklyn Vs Sam

About a week ago, I asked the question, what beer will you be enjoying during the Super Bowl this year. I decided to take RealSimple.com's lead on this and do something creative with beer this year. Rather than matching up Brooklyn Brewery's Brooklyn Lager vs Sam Adams Boston Lager, I wanted to pit Brooklyn vs an offering from Harpoon.

The two breweries actually have a fun bet going on the game...

When it was determined that the New England Patriots would be playing the New York Giants in the Super Bowl, Harpoon president Dan Kenary dialed up his friend Steve Hindy, president of Brooklyn Brewery, and arranged a wager. The wager: if the Patriots win the Super Bowl, Brooklyn will pour a keg of Harpoon IPA in their tap room and if the Giants win, a keg of Brooklyn Lager will be tapped in Harpoon's Boston tap room.

"It's going to be a great game on Sunday and I wish Steve and all the Giants fans at the Brooklyn Brewery good luck," says Kenary. "I look forward to having a Harpoon IPA in the Brooklyn tap room with Plaxico Burress next week."

On Monday, the brewery that has won the wager will ship a keg of their flagship beer to the losing brewery for tapping on their draft system. The beer will remain on tap until the keg is empty.

So, I ettled on Brooklyn Lager vs Sam's Boston Lager. Not to worry, I'm no snob, and I like a good Sam just as much as the next guy. Besides, Sam Adams was both a "brewery and patriot." And Brooklyn makes a Giant beer...

Call it my version of the "The Bud Bowl" minus the crappy beer. I plan on having the guys that come over tonight do a mini review and blind taste test during the half time. I'll try to post some quick video clips and let you know who wins.

It'll be interesting (at least to me) to see which beer comes out on top, and if the winning beer matches the winning team! Keep in mind, I live in CT, in the center of the state, a little place I call "FunkyTown", which is smack dab in the middle of NYC and Boston. It's basically the "DMZ" for New York and New England. This should be interesting... I hope...

I never got around to writing a review for the Holiday Ale I made this winter. I still have some left and brought a couple over to Dave's a week or so ago so he could try it. As you can see from the photo below, like most of my beers, it is a heady beast! I'll be honest, I poured this one to really show off the head, because the tiny bubbles flow up the pint glass from the inside/bottom much like they do with a glass of Guiness. 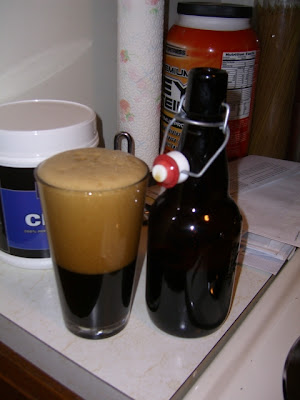 And now, in the interest of gaining closure on the whole Holiday Ale brew, here's Dave's VERY short review, before the digital camera crapped out on us... Take it away Dave!