Where was beer born? Iraq?!?

I have today off from work, and I intended on bottling my latest home brew today, but after seeking advice elsewhere, I've decided to let the brew sit another week first. So now what do I do with my day off? How about do a little reading?

Question of the moment: Where was beer born?

Answer: Mesopotamia (That would be the southern portion of present-day Iraq) Beer started off as a religious experience, but now the beer goddess is schilling beer to the women of the UK. Her recipes were found on an ancient stone in Iraq, and the guys over at Anchor Brewing tried to recreate some of them...

Read this interesting article about the birth of beer in Mesopotamia, and it's eventual decline as the geopolitical world changed around it.

Beer was born in Iraq?!?

Well it wasn't Iraq at the time, but geographically speaking, yes, yes it was... This is ironic, at least for me. I've spent a good amount of time in the Middle East, in various countries, and beer is almost always taboo. 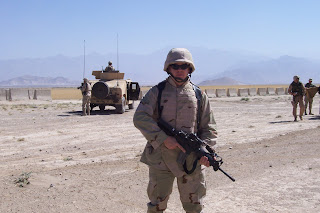 One of the hardest parts of deploying to the Middle East as a member of the US armed forces (besides avoiding bodily injury) is the lack of beer. In an attempt to not offend our allies in the region (most of whom have religious based disdain for alcohol) the military follows what is called General Order 1.

General Order 1 prohibits the consumption of alcohol and sexual activities by United States Department of Defense personnel while in a combat zone. In other words, all fun has been canceled.

I'm all for keeping good relations with our allies in the region. And honestly, a lack of beer, as hard and bothersome as it is, is good for my beer gut. The occasional deployment can be like a fat farm, giving you the break from temptation long enough to drop some excess weight. But sitting in 140 + degrees in the desert begs for an ice cold beer. It's a challenge, so thank a war Vet today and remember his or her sacrifices, both big and small.

I wonder if Southern Iraq is ready for a rebirth of Sumerian Beer? Maybe the folks in Iraq can add kick ass beer to list of money making exports? Apparently someone tried to do just that...

Anyone ever here of the Eastern Brewery Co, in Iraq? Me neither, and I guess it's already out of business. This is all I could find on the now "retired" Ferida Lager.

An Iraqi beer who have travelled a long way through the desert to reach me. I must admit not to have expected to much from it. It has deep golden colour, not soapy yellow as in my prejudices. Fruity aroma. Surpisingly it has chewy maltiness and crystal malt character. It is clean, medium bodied and medium sweet, and finishes with low bitterness. Actually a tasty and well made lager. - omhper Stockholm, Sweden - Date: May 19, 2002

A tasty well made lager... Too bad it's retired... Anyone else out there have more info on the now defunct Eastern Brewery Company? I mean it was trading on the Iraqi Stock Exchange at one point...

I hope beer takes hold in Iraq, along side democracy that is. It might do them all some good to chill out and enjoy a good beer now and then. I think Iraq needs a beer advocate, don't you?

Here's an Iraqi Blogger's explanation on what it takes to get a beer in Baghdad. Posting a link to this guy in no way indicates that he and I are on the same sheet of music politically. To be honest, I didn't read anything on his blog beyond the beer post. Politics be damned, this is a blog about beer, not politics! ;-)

Iraqi men drink in public by the Tigris river in Baghdad
in the early evening before curfew.
Public drinking has increased since
the fall of the Saddam regime. Photo: Jason South
at 7:38 AM