"For beer drinkers with a weight problem"

I was checking out some of my favorite beer blogs this morning and saw this headline on Stonch's Beer Blog. "For beer drinkers with a weight problem" 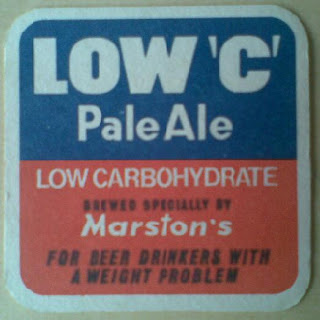 With my current push to keep enjoying beer while losing my extra weight, I immediately took interest in this post, but it wasn't exactly what I expected.

Stonch tells us about the parents of a friend who found some interesting items in their new home, left behind by the previous owner, including a stack of "pork sword" movies and a bag of "old beer mats" or bar coasters as one in the states might call them.

"...moving images of the previous owner wielding his pork sword in the direction of his lady wife..."

Now that's comedy... HA! But on a more relevant topic, one of the "beer mats" they found was for an old British beer called Low 'C' Pale Ale... An early low carb beer from Marston's... You gotta love that slogan!

I guess Michelob Ultra is not only a terrible tasting beverage, but also an unoriginal one at that! The lesson here is, what's new is old and what's old is new... And don't leave behind your home made dirty movies when you sell your house... And that's one to grow on...