The thing I hate about brewing beer is keeping everything clean. I've read that your stuff should be nearly as clean, if not more than, as a hospital. That aint happening at my house. But I sure did give it a good try this time around. 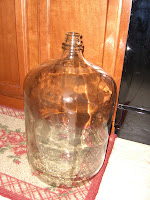 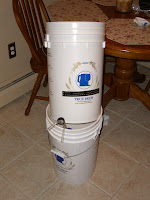 This time around I was going to use my brand new glass carboy, so I can check in on the beer periodically and watch it grow up into a tasty liquid refresher right before my eyes. There hasn't been this sort of excitement in my life since I got that Sea Monkey kit back in the day!

I used my old plastic fermenting bucket as a cleaning basin, filling it to the 2 gallon maker with clean water and some C-Brite sanitizing solution. I believe that's suppose to be a non-rinse cleanser, but I always rinse anyway.

I always flash back to my days of working the all night shift at that crappy gas station in Willimantic, CT, otherwise know as the heroin capital of the East Coast. The manager told me to clean the coffee dispensers with comet, and she wasn't all that particular about rinsing them out... Keep that in mind the next time you help yourself to a hot cup of gas station Joe...


At any rate, I think I did a pretty good job cleaning the gear, but I wouldn't do any open heart surgeries on my kitchen counter. Especially considering that ugly yellow towel I used to dry the equipment on has been to Afghanistan, God only knows what sort of microscopic funk lives in that towel. 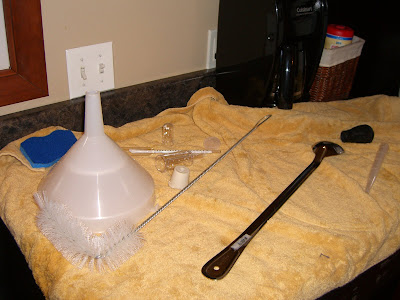 But I'm sure the beer will be fine, what could possibly go wrong, right? 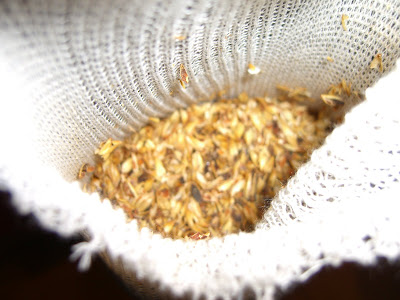 I love to watch the water slowly turn that wonderful copper color as the Crushed Crystal Malt begins to work it's magic. The water is now gradually becoming wort, and before you know it, it'll be beer! (Well hopefully in a few weeks it will be...) 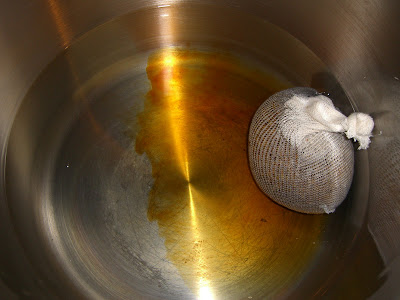 Now here's one of the steps in home brewing that I always hate. The age old problem of the watched pot... You know what they say... IT NEVER BOILS! My pot took nearly an hour to boil. Completely frustrating! I'm beginning to think I need to spring for one of those outdoors, propane brewing cooker things. Does anyone know if they're more powerful than your standard stove? I almost wonder if there is some sort of heat governor on my stove, to prevent the glass top from cracking? I couldn't find the pot's top, so I had to improvise and use an old cookie sheet on top to speed up the boiling process. 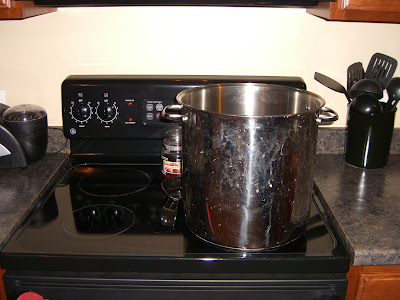 The biggest challenge for me continues to be the hydrometer. But I followed some advice I got from "Camper" over at beertools.com

Try and look at the level of the wort. Sometimes you take an average reading. I have a precision hydrometer that reads from 1.000 to 1.070. This is easy to read than the ones that have a large range. - Camper

I followed "Camper's" advice and the wort did in fact overflow onto my kitchen counter. The wife loves that... It was a little easier to read. Although I'm still confused about my reading. According to the brew kit instructions, the initial gravity should have been somewhere between 1.044 and 1.048... My reading was 1.034, off by .01... But I called my local home brew supplier and he said not to worry too much about it. 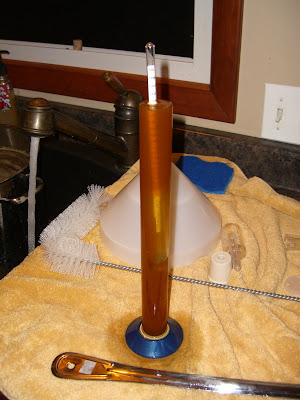 He suggested sinking my hydrometer in water and take a reading. It should be 1.000 if it works properly, I guess I'll try that later this week. 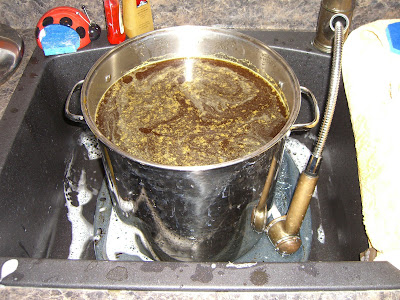 At any rate, I did my best to cool the wort quickly, I really need to get one of those chillers, it cools almost as slowly as it boils! I just hope I didn't shock the yeast, I hope it was cool enough. 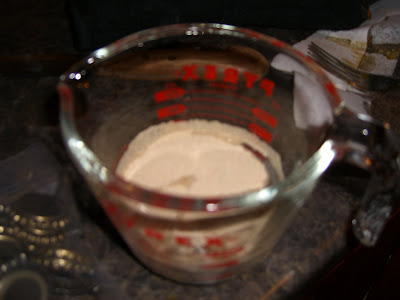 After the yeast was added I used my new funnel to fill the new glass carboy with my wort, and only splashed a little on the kitchen floor. The wife loves that... 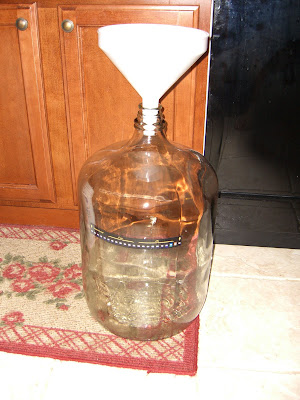 Here's the thing. The new funnel has a mesh trainer built in, and the sediment ended up clogging the funnel, a big pain in the butt. I had to scoop it out as I poured the big pot of wort, not an easy thing for one man. I sure hope that sediment wasn't critical to the fermenting process, I guess I'll find out soon. 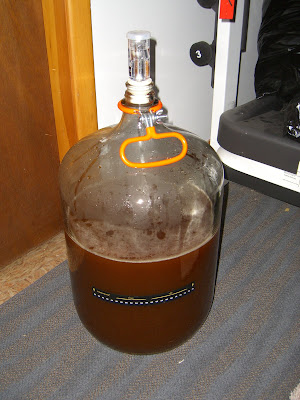 After I got the wort into the carboy, I popped on the airlock and brought the whole thing downstairs to the finished basement. It's cooler down there and the temperature is more stable. But, it was a little warm, so I aimed an old box fan at the carboy and hoped for the best... 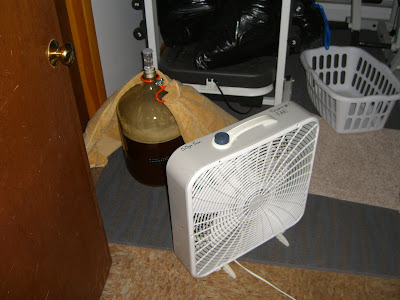 I have more to tell you and more pictures to add, but blogger is being flaky, and I'm tired... Time to get some shut eye so my eyes stay open at work tomorrow... 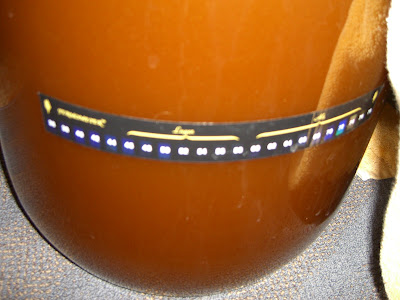