Round two was a disastrous brew

I had done it, I had brewed a great batch of beer, despite my clumsiness and technical issues. I look back and consider the pride in my mother's eyes when the entire family would rant and rave about a wonderful meal she cooked. I experienced a similar sense of satisfaction seeing friends and family enjoying my beer. Then I remembered Grandma's special "root beer"...

My parents never brewed, but there was the legend of Grandma's famous "root beer" that may not have been "root beer" at all. Rumor has it that her infamous beverage was more "beer" than "root" and that it packed a serious kick. Was this just some old family joke passed down by my cousins, or was Grandma a closet home brewer? I'll never know. And if my second attempt at brewing is any indication, brewing simply does not run in the family...

My second batch of beer was a complete failure. I think I had some handicapped yeast this time. The recipe kit I used (I brain dumped what brand it was, so don't ask...) came with a "slap pack" of yeast. You slap the pack and the yeast activates. You know you're good to go when the packet bloats up. But something may have gone wrong with the yeast. The amount of bubbles produced in the airlock was dismal, but it may have been an issue of sanitation, or something else.

I didn't get past my issues with the hydrometer either, I just can't get a clear reading. This should be simple, but for some reason it's not for me. I really could use a digital hydrometer. But does anyone use those for brewing? I've only found expensive scientific digital hydrometers, I need something cheap and effective. If anyone is reading this and can help, please leave a comment...

I also had some difficulty with the bottling process. Those damn caps didn't want to go on this time, and I'm not sure if it was because I was using a different brand of cap, or if it was something else. I sad it before and I'll say it again, two handed cappers suck!

Next time I'll use the "Grolsch" style bottles with the flip caps. No more cleaning smelly old empties, and no more crappy two handed capers and cheapo bottle caps! 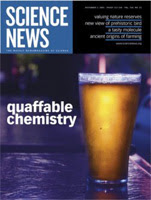 Bottom line, when I opened the first few beers at the end of the entire process, they tasted OK. Not great, but not bad, just OK. But then I opened a few more and they either tasted like crap, or were flat. Some smelled terrible. I'm convinced the flat beers had something to do with poor capping on my behalf. The beers that tasted and smelled funny may be another issue all together. At least I think. If anyone reading this has some insight, I'm all ears...

I didn't check each individual beer. But after opening a few crappy bottles in a row, I gave up on the entire batch, and gave up on brewing up until now.

So, my wife is about to leave the country for about 3 months on military duty. Yes, we're both in the military. I'm going to take that time to try my hand at brewing once again.

Stay tuned for batch number three. Let's hope I can do Grandma proud this time around...
at 12:07 PM